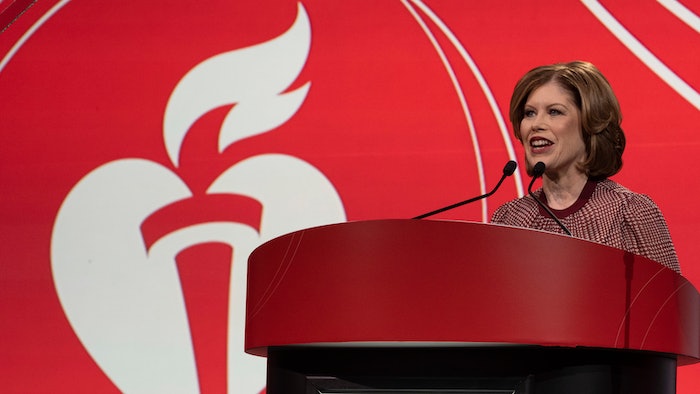 She delivered an exciting summary of AHA successes and initiatives, beginning with its Quit-Lying national campaign that exposes the dangers of vaping and nicotine. The AHA has made great strides toward eliminating flavored tobacco products and moving the FDA to announce its intention to reduce nicotine levels in cigarettes and proposing to prohibit the sale of menthol cigarettes and flavored cigars.

“Solving big problems is what we do at the American Heart Association,” Brown said. “It’s been that way for nearly 100 years — since that summer day in 1924, when six cardiologists formed our organization at the Drake Hotel just a few miles from here.”

Brown summarized numerous recent funding partnerships, including increased funding to the AHA’s Second Century Campaign; an agreement with Bank of America to improve the health of historically excluded populations; funding from the Deloitte Health Equity Institute and a relationship with Society for Human Resource Management to develop and scale tools to improve the health and well-being of the nation’s workforce; and a deal with HCA Healthcare and HCA Healthcare Foundation to fund the AHA’s Getting to the Heart of Stroke initiative.

Brown also announced the AHA, Rockefeller Foundation and Kroger will launch a national Food Is Medicine research initiative this spring.

“It reaffirms the American Heart Association’s mission: To be a relentless force for a world of longer, healthier lives,” Brown said.