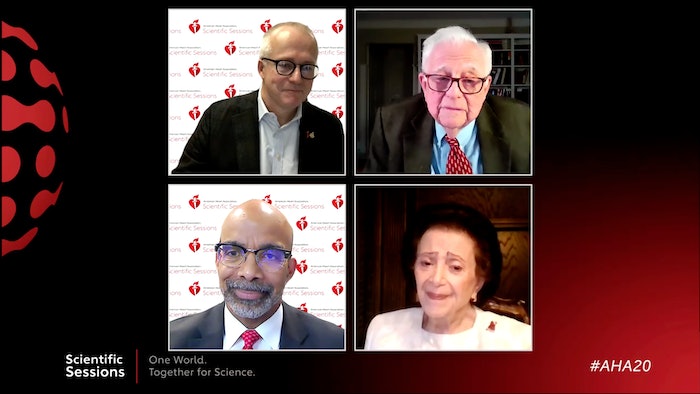 Now is one of the best times to dismantle structural racism and gender inequities — not despite COVID-19, but because of it, said Eugene Braunwald, MD, FAHA, a featured speaker in Friday’s Opening Session at Scientific Sessions 2020.

The pandemic has shined a spotlight on disparities and the fallout for people of color and women and the current climate is comparable to being at war, said Dr. Braunwald, a renowned clinician, researcher and administrator.

Dr. Braunwald and Nanette K. Wenger, MD, FAHA, both legends in cardiology, offered more than 100 years of combined wisdom and historical perspective to evaluate COVID-19 and its impact on scientific research, racism and gender inequity during a Fireside Chat with co-moderators Robert A. Harrington, MD, FAHA, and Clyde Yancy, MD, MSc, FAHA.

Dr. Braunwald, whose family escaped the Nazi occupation of Austria when he was a boy, recalled how World War II disrupted people’s lives with food rationing and irregular transportation.

“Minorities and poor people are the ones who always suffer the most, and they certainly did during World War II,” said Dr. Braunwald, the distinguished Hersey Professor of Medicine at Harvard Medical School and founding chair of the TIMI Study Group at Brigham and Women’s Hospital in Boston. “Now, it’s 2020, and we’re in the COVID pandemic and there are a lot of similarities.

For Dr. Wenger, who arrived in Atlanta, Georgia, in the early 1960s, a different struggle captured her attention. Segregation was the law and the policy at the clinic where she worked. Staff were expected to treat Black people one way and White people another, she said.

“This was absolutely against all my core values, and as head of the clinic, I said this was not going to happen,” said Dr. Wenger, professor of medicine in the Division of Cardiology at the Emory University School of Medicine in Atlanta. “Every week, I was called into the office of the director for violating the rules.”

She said she’s also personally experienced a lifetime of gender disparity. Even though she had gender-neutral mentors during her career, even education and a promising career didn’t exclude her from discrimination.

“It’s a completely different landscape now, but when we look at leadership positions, there is a paucity of women,” said Dr. Wenger, who recalled not being allowed to open a bank account without her husband co-signing and when Harvard had a 10-woman quota.

“There is a leaky pipeline. Where is the leadership we need? Not encouraging women to participate in cardiovascular medicine is depriving it of a huge talent pool.”

COVID-19 has disproportionately disadvantaged women, especially those with children who have had to become housekeepers, teachers and even playground monitors in addition to their careers, Dr. Wenger said.

“We have yet to find out how we can mend the careers of women who were impacted by that,” she said.

Despite the destructive nature of war, it inspires a swift call to action, Dr. Braunwald said.

“I don’t want to say for a moment that there are good sides to war, but you can take advantage of some situations during war,” he said.

In War World II, thoracic surgeons working the front lines were forced to remove bullets from the heart — a previously forbidden surgical territory. It pioneered mitral valve surgery and ultrasound technology to detect submarines and torpedoes much sooner than it would have happened outside of war.

“It’s a little too early to say what will come out of COVID,” Dr. Braunwald said. “I’m impressed with the public/private partnership, particularly with the development of vaccines. I do think clinical trials are moving faster and in a very intelligent way that I’m excited about … and it’s something that we should try to continue in some way.”

Dr. Wenger said she sees benefits and risks to the warp speed of clinical trials related to COVID-19. She’s also pleased that virtual trials enable the inclusion of more diverse people who may not otherwise have access. One of the most important advances in this clinical trial climate is how it has removed some scientific barriers for the general public.

“What COVID has done is enlarge the vocabulary of the public, so it’s no longer an academic issue,” she said, noting that more people are more comfortable with the words such as scientific, evidence-based and clinical trials.

“We have never seen such a rapid volunteerism in enrollment in vaccine trials (as with the COVID-19 vaccine). It was stunning.”