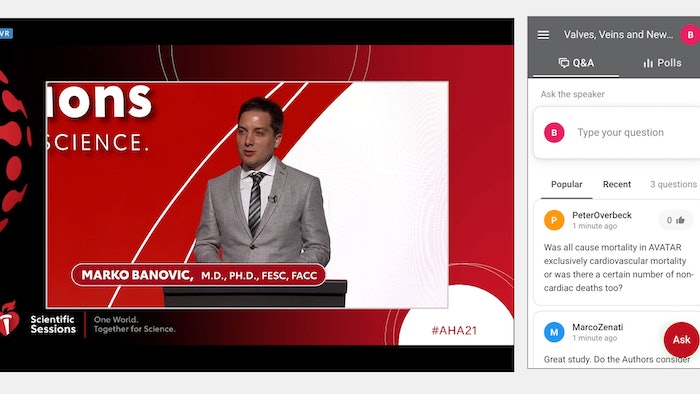 “Currently, there is a strong recommendation for intervention in patients with severe aortic stenosis only when they have symptoms or impairment in left ventricular systolic function. However, the most frequent symptom is dyspnea, which is subjective and often difficult to interpret,” said Marko Banovic, MD, PhD, cardiologist and associate professor at the University Clinical Centre of Serbia Cardiology Clinic, the study’s principal investigator.

Compared to subjects in the conservative treatment group, subjects randomized to early surgical aortic valve replacement had lower incidence of primary composite endpoint, which included all-cause death, acute myocardial infarction, stroke and unplanned hospitalization for heart failure requiring intravenous treatment with diuretics or inotropes. Among the individual components, all-cause death and heart failure hospitalizations were most common and appear to drive the overall early surgery benefit. There were no differences between groups in secondary endpoints, including in-hospital and operative mortality, repeated major adverse cardiovascular events, major bleeding or thromboembolic complications.

Dr. Banovic noted that the study’s results, based on the randomized, controlled design, expand upon previous observational data and results of the only randomized trial published in 2019 of selected patients with very severe aortic stenosis.

“Our findings indicate that surgical valve replacement can be considered when low-risk patients are asymptomatic. We remain mindful that the totality of the evidence needs to expand, but our data bring additional important consistency for the clinician’s consideration that early surgery can or should be considered when aortic stenosis becomes significant regardless of the symptoms,” Dr. Banovic said. “This is of importance in clinical practice since aortic stenosis is the most frequent valvular disease among patients referred to the hospital."  This study has a simultaneous publication in Circulation

“In patients with acute coronary syndromes, an early surgical strategy, two to three days after Ticagrelor cessation, was noninferior in incurring severe or massive bleeding compared to delaying surgery until five to seven days,” said Derek So, MD, cardiologist and clinician investigator at the University of Ottawa Heart Institute, the study’s principal investigator. In secondary analysis, the median length of stay was nine days in the early surgery group versus 12 days in delayed surgery group.

The study provides insight on the timing of CABG surgery in relation to European Society of Cardiology and ACC/AHA guidelines, which suggest waiting three and five days after Ticagrelor cessation, respectively. “This is the first and only randomized trial looking at the specific timing of CABG surgery and Ticagrelor cessation, which might reassure surgeons that going to surgery earlier than five days is safe,” Dr. So said.

The multicenter, prospective randomized trial conducted through the NHLBI-Supported Cardiothoracic Surgery Trials Network at 17 cardiac surgery centers in Canada and the U.S. enrolled 224 patients with multivessel atherosclerotic coronary artery disease, scheduled to undergo saphenous vein grafts during coronary artery bypass grafting surgery with arterial grafting of the internal mammary artery to the left anterior descending and two or more saphenous vein grafts. The study used within-patient control; one of the vein grafts within each patient was randomly assigned to receive VEST external support.

The primary endpoint, intimal hyperplasia area/graft occlusion, which was assessed by intravascular ultrasound at 12 months, did not reach statistical significance (p=0.07). The analysis included imputed data for patients who did not undergo angiographic and intra-vascular ultrasound assessment of both a vested and nonvested vein graft at the time of follow-up. Among patients who had assessment of both vested and nonvested grafts at follow-up, intimal hyperplasia area was statistically significantly lower in the vested grafts (p=0.04).

“Vein grafts don’t last forever after coronary bypass surgery. About half of them will be closed in 10 years,” said John D. Puskas, MD, chair of the department of cardiovascular Surgery at Mount Sinai Morningside in New York City, the study’s principal investigator. “But this concept of supporting vein grafts with a VEST, a cobalt chromium mesh, which is an extremely inert material, may have merit for increasing the longevity and durability of vein grafts.”

As dictated by the study’s protocol, patients will continue to be followed through five years. “We’re cautiously optimistic this field of investigation will lead to better care for patients in the future,” Dr. Puskas said.

Tricuspid annuloplasty in patients with moderate or less than moderate tricuspid regurgitation undergoing mitral valve surgery with tricuspid annuloplasty (TA), had a lower incidence of the progression of tricuspid regurgitation (TR), compared to patients who underwent mitral valve surgery alone. However, reduced TR progression came at the cost of an increased risk of permanent pacemaker implantation, according to Evaluating the Benefit of Concomitant Tricuspid Repair During Mitral Valve Surgery.

“At two years, tricuspid annuloplasty had no impact on major adverse cardiac and cerebrovascular events, survival or quality of life. But two years may not capture the long-term effects of tricuspid valve intervention. Long-term follow-up is ongoing to fully determine the net clinical benefit of concomitant TA,” said James S. Gammie, MD, the James T. Dresher Sr. professor in Cardiac Surgery at Johns Hopkins Heart and Vascular Institute in Baltimore. The trial analysis was simultaneously published in the New England Journal of Medicine.