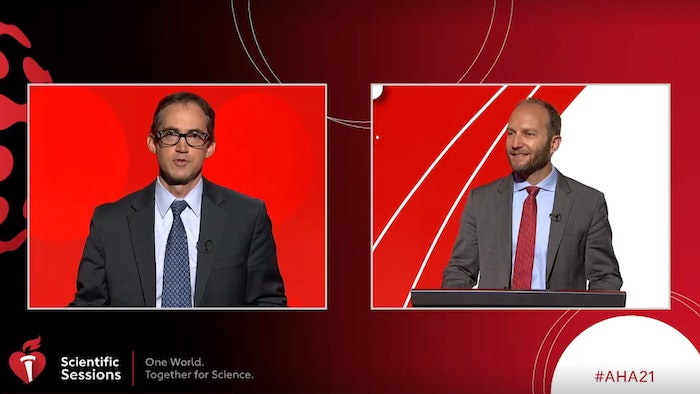 A longstanding assumption in heart failure has been that accurate risk evaluation guides clinical decision-making in selecting therapies most likely to benefit individual patients. The first study to examine this hypothesis using a randomized design, the Risk Evaluation and Its Impact on Clinical Decision Making and Outcomes in Heart Failure: REVeAL-HF trial, found that when clinicians were given knowledge of their patient’s heart failure (HF) prognosis during hospitalization, the additional information did not significantly impact the primary study endpoint of composite of all-cause mortality at one year or re-hospitalization in 30 days.

Guidelines and treatment recommendations for heart failure are largely based on the percentage of left ventricle ejection fraction, said Tariq Ahmad, MD, MPH, director of cardiac transplant and mechanical circulatory support and interim chief of the heart failure program at the Yale School of Medicine and Yale New Haven Health.

REVeAL-HF was a pragmatic, embedded trial that randomized 3,124 adults hospitalized for HF to usual care with no alert or an alert for one-year mortality risk assessment. Clinicians caring for patients in the intervention group automatically received their patient’s risk score as an alert at the time they were entering treatment orders. Providers had the option to supply feedback on their impression of the risk score and to adjust orders based on individual patient risk scores.

Dr. Ahmad said, “We need to move toward more risk-based treatment recommendations in heart failure guidelines, which do not currently exist. The benefit from treatment varies significantly across the spectrum of risk, and this information is crucial for shared decision-making. Our study also shows the underutilization of palliative care for patients at high risk for adverse outcomes, a major gap in the current treatment of patients with heart failure.”

A nationwide trial found that Fitbit fitness trackers or smartwatches can detect atrial fibrillation (AF) and identify undiagnosed users who could benefit from clinical intervention. The Fitbit Heart Study involved 455,699 adults from May through October 2021 who habitually wore a Fitbit-compatible device and did not have a prior AF diagnosis. The study used optical pulse photoplethysmography sensors built into devices to measure pulse waveform data that may be useful to infer the presence of cardiac rhythm abnormalities, such as AF.

The median age of participants was 47 years and 12% were ≥65 years, 71% were female and 23% were non-white, reported Steven A. Lubitz, MD, MPH, FAHA, physician investigator and cardiologist at Massachusetts General Hospital and associate professor of medicine at Harvard Medical School. Pulse photoplethysmography data from participating Fitbit users were analyzed centrally using a novel software algorithm.

Participants with an irregular heart rhythm detection were notified and invited to schedule a telehealth visit with a commercial telehealth provider. The provider screened participants for eligibility and sent eligible individuals an electrocardiogram (ECG) patch monitor to be worn for one week. At the end of the week, the monitor was returned by mail for data evaluation and participants were encouraged to schedule a follow-up telehealth visit to discuss results and potential next steps.

“The study shows that using wearable devices can enable large scale and accurate identification of individuals with undiagnosed AF,” Dr. Lubitz said. “There is a substantial probability that when the algorithm fires and notifies the user of an irregular heart rhythm, that they will indeed have AF on subsequent confirmatory follow-up testing using an ECG patch monitor.”

Alcohol, but not caffeine, triggers AF

The first study of patient-selected triggers for atrial fibrillation (AF) found that alcohol use was associated with a higher risk of acute symptomatic paroxysmal AF events, but caffeine intake was not. The Individualized Studies of Triggers of Paroxysmal Atrial Fibrillation (I-STOP-AF) study randomized patients with a smartphone 1:1 to undergo individualized (N-of-1) testing of a self-selected trigger versus AF electrocardiogram (ECG) monitoring alone. The N-of-1 test group submitted daily smartphone-based ECG monitoring and self-reported on the effect of either avoiding specific AF triggers or intentional exposure to those same triggers.

The N-of-1 design allowed 251 participants to test individually selected triggers in randomly assigned one-week periods over six weeks. The most common triggers were caffeine, alcohol, exercise and reduced sleep. Less commonly selected triggers included lying on the left side, dehydration, cold food or drink, large meals, specific diets and customized triggers. Trigger compliance was assessed with daily questionnaires and the frequency of AF was determined by real-time self-report through the mobile app and remote ECG.

After six weeks of trigger testing, participants were given the results of their tests and given four weeks to modify their behaviors and lifestyle in response to their individual test results, during which time they were followed for an additional four weeks with daily AF and ECG reporting.

A control group of 248 participants who did not test for triggers were asked about AF events the prior day and submitted a remote ECG each day for 10 weeks.

The primary outcome was the change in Atrial Fibrillation Effect on Quality-of-life (AFEQT) score at 10 weeks and secondary outcomes included the number of daily AF events recorded during the four weeks following trigger testing.

There was no difference in AFEQT scores between the N-of-1 and the AF monitoring only groups, reported Gregory Marcus, MD, FAHA, professor of medicine at the University of California, San Francisco. Although testing had no effect on overall quality of life scores, the N-of-1 group had significantly fewer AF events during the four weeks after testing, adjusted RR=0.60, p<0.0001. Participant-reported data showed consumption of alcohol, but not caffeine, was associated with AF events.

“To my knowledge, this is the only randomized trial to assess the relationship between caffeine exposure and AF,” Dr. Marcus said. “It contributes to the growing body of evidence that caffeine does not seem to increase the risks for AF and that alcohol does contribute to AF risk in a very acute sense.”