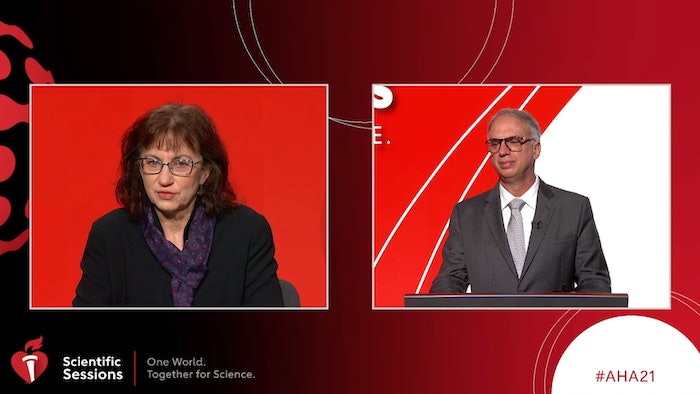 Investigators in four trials revealed findings to impact the treatment of patients with atrial fibrillation (AF) and common cardiac arrhythmias during their Late-Breaking Science session “Prevention to Intervention in Atrial Arrhythmias” on Sunday. They found:

The prospective parallel study enrolled 200 patients with AF age 70 and older scoring CHADS-2VASc >1. Patients were randomized to receive warfarin (once daily, dose controlled by international normalized ratio (INR) between 2 and 3) or dabigatran (110 or150 mg) twice daily for two years. After one year and at the study’s conclusion at two years, patients underwent an extensive cognitive evaluation, which included the Montreal Cognitive Assessment, the Mini-Mental State Exam, Neuropsychological Battery and Computer Generated Neuropsychological testing.

“In both groups, cognitive decline was very small,” said Bruno Caramelli, MD, PhD, associate professor of cardiology at the University of Sao Paulo, Brazil, the study’s principal investigator. Dr. Caramelli noted, however, that time in therapeutic range in the warfarin group was 70%.

“In older patients with AF or atrial flutter who did not present major cerebrovascular events and were adequately treated with warfarin or dabigatran for two years, there was no difference in the majority of the cognitive outcomes. We speculate that both treatments, when carried out properly and effectively, may prevent the cognitive decline that is observed in this population,” Dr. Caramelli said.

Coffee increases ventricular ectopy and physical activity and reduces sleep duration, according to the Coffee and Real-Time Atrial and Ventricular Ectopy (CRAVE) trial, the first randomized trial to assess relationships between coffee consumption and common arrhythmias.

The trial enrolled 100 male and female volunteers randomly assigned to consume or avoid coffee daily for 14 days, communicated by daily texts and reminders, with the primary endpoints of change in premature atrial contractions and premature ventricular contractions. Adherence to the randomization assignment was assessed by button presses to a continuously recording ECG device to time-stamp every coffee drink as well as daily surveys recounting coffee consumed the previous day, reimbursing all date-stamped receipts with coffee purchases and geofencing visits to coffee shops. Subjects were also monitored with a wrist-worn Fitbit, a continuous glucose monitor and a smartphone mobile application to collect geolocation data. DNA was genotyped for caffeine metabolism-related single nucleotide polymorphisms.

In intention-to-treat analysis, random assignment to consume coffee was associated with an increase in premature ventricular contractions, 1,058 additional Fitbit-based steps per day (95% CI 441-1675, p=0.001) and 36 fewer minutes of sleep per night. In per-protocol analysis, each additional cup of coffee consumed was associated with fewer supraventricular tachycardia episodes, 587 additional steps per day and 18 fewer minutes of sleep night. No significant effects on premature atrial contractions or changes in glucose levels were observed.

“Coffee, which is one of the most commonly consumed beverages in the world, appears to have both positive and negative health implications,” said Gregory Marcus, MD, FAHA, professor of medicine at the University of California, San Francisco, the study’s principal investigator. “These data provide no evidence that coffee will increase the risk of supraventricular tachycardia arrhythmias, including AF. For ventricular arrhythmias, these data suggest coffee may be harmful. To increase physical activity, coffee may be beneficial. It’s a heterogenous, complex and multifaceted effect.”

In the single-center, single-blind adaptive trial, 420 patients undergoing elective interventions on the coronary arteries, aortic valve and/or ascending aorta with no previous history of AF were randomized to receive left posterior pericardiotomy, or the standard of care (no intervention).

“Our data confirm in an adequately powered and rigorous prospective randomized trial that posterior left pericardiotomy is associated with a large and statistically significant reduction in the incidence of postoperative AF after coronary artery bypass grafting, aortic valve and aortic surgery,” said Mario F.L. Gaudino, MD, FAHA, the Stephen and Suzanne Weiss Professor in Cardiothoracic Surgery in the Department of Cardiothoracic Surgery at New York Presbyterian-Weill Cornell Medical Center, the study’s principal investigator. Posterior left pericardiotomy was not associated with perioperative complications. A large multicenter trial, including the entire spectrum of cardiac surgery operations, is needed to quantify the potential clinical benefits of the intervention

The Lariat™ Suture Delivery System is safe and effective for left atrial appendage exclusion but was not superior to standard ablation for reducing episodes of AF, according to Outcomes of Adjunctive Left Atrial Appendage Ligation Utilizing the LARIAT Compared to Pulmonary Vein Antral Isolation Alone: The aMAZE Trial.

The prospective, multicenter, randomized controlled study enrolled 610 patients with persistent AF at 53 sites to evaluate the safety and effectiveness of the Lariat procedure to percutaneously isolate and ligate the left atrial appendage from the left atrium as an adjunct to planned pulmonary vein antral isolation catheter ablation in subjects with symptomatic persistent or longstanding persistent AF. The 30-day primary safety event rate was 3.4%, which was statistically less than the prespecified performance goal of 10%.

“This particular approach to isolating the appendage demonstrates that it’s safe and effective to exclude the appendage from the rest of the left atrium,” said David Wilber, MD, FAHA, Eisenberg Professor of Medicine at Loyola University in Chicago, the study’s principal investigator. The secondary outcome measure, freedom from recurrent atrial arrhythmias at 12 months, was 64.3% in the Lariat plus pulmonary vein antral isolation treatment group and 59.9% in pulmonary vein antral isolation alone group, which did not reach the standard needed for superiority.