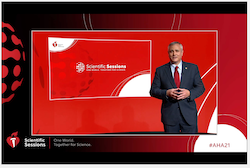 “There were cracks in the foundation of our pyramid,” said AHA President Donald M. Lloyd-Jones, MD, ScM, FAHA, and chair of the Department of Preventive Medicine at Northwestern Feinberg School of Medicine in Chicago. “The obesity epidemic and widening socioeconomic and educational disparities began taking a toll on population health, jeopardizing our efforts. Something was missing from the pyramid.”

“We must continue with tertiary, secondary and primary prevention. But that’s not enough. Each of those approaches tries to correct a problem. Primordial prevention is a game changer. It focuses on trying to prevent the development of risk factors in the first place,” Dr. Lloyd-Jones said. He cited powerful scientific data supporting evidence that people with high cardiovascular health live longer, healthier lives. They not only experience less cardiovascular disease, but less cancer and dementia, he said.

“Primordial prevention is the path to launching a generation of children with ideal cardiovascular health. It’s the only way to break the current stagnation,” Dr. Lloyd-Jones said.

Launching a new generation into a lifestyle of high cardiovascular health with the goal of eradicating cardiovascular disease is a monumental task. But advocacy efforts are already underway that support primordial prevention, including AHA’s 2024 Impact Goal and its focus on health equity, which is anchored in equity and inclusion in research funding, advocacy, community investment, workplace health, scientific publications and more.

“We are committed to ensuring all people have the opportunity for longer, healthier lives,” said AHA CEO Nancy Brown. “This is our North Star.” Ms. Brown cited other AHA initiatives designed to strengthen all four tiers of the Prevention Pyramid, including investing $20 million in the Health Equity Research Network on preventing hypertension and co-leading the Periodic Table of Food Initiative, a global research and discovery platform introduced last year by the Rockefeller Foundation.

“By capturing and quantifying the composition of food, it sets the stage for scientific breakthroughs with the potential to revolutionize the health, agriculture and food sectors,” she said. “This is the kind of big swing we like to take. It’s a global initiative that can create healthier people and a healthier planet.”