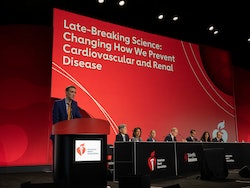 Investigators revealed findings on the impact of supplements to lower cholesterol, a novel therapy for lowering lipoprotein(a), or Lp(a), levels, and the impact of a sodium-glucose co-transporter 2 inhibitor for patients with chronic kidney disease (CKD) during “Changing How We Prevent Cardiovascular and Renal Disease” Late-Breaking Science session on Sunday. They found:

How do common supplements promoted for cholesterol health measure up to low-dose statin medication for cholesterol reduction? The Supplements, Placebo or Rosuvastatin Study (SPORT) Trial put them to the test.

Rosuvastatin reduced LDL-C cholesterol by 37.86%. In the supplement groups, there were no significant changes in total cholesterol, LDL-C, HDL and triglyceride levels compared to placebo.

“The SPORT results and its messaging are important for public health,” Dr. Laffin said. “Cardiologists, PCPs and others should consider using these results to have evidence-based discussions with patients.”

The study will be published in the Journal of the American College of Cardiology.

“Olpasiran is a novel therapeutic that leads to a very marked and sustained reduction in lipoprotein(a) levels,” said Michelle O’Donoghue, MD, MPH, a senior investigator at the TIMI Study Group and cardiologist at Brigham and Women’s Hospital and Harvard Medical School in Boston. “The drug appears to be safe and well-tolerated. These findings set the foundation for phase 3 testing scheduled to commence later this year," she said.

The study was published in the New England Journal of Medicine following the presentation.

The study randomized 6,609 patients with CKD at risk of disease progression in 241 sites from eight countries to empagliflozin once daily versus matching placebo and followed them for an average of two years. The primary outcome was kidney disease progression or cardiovascular death. Kidney disease progression included sustained ≥40% decline in estimated glomerular filtration rate (eGFR) from randomization, or to <10 ml/min/1.73m2, end-stage kidney disease or renal death. EMPA-KIDNEY was stopped early for efficacy.             Treatment with empagliflozin reduced the risk of composite of end-stage kidney disease or cardiovascular death. Results were consistent in patients with or without diabetes, and across the full range of eGFR studied (down to an eGFR of at least 20 ml/min/1.73m2). There were also fewer hospitalizations among patients allocated to empagliflozin compared to placebo. There were relatively few cardiovascular events, however the outcomes were consistent with benefits seen for SGLT2 inhibitors with other trials.

When combined in a new pooled analysis of >90,000 participants from 13 large placebo controlled SGLT2 inhibitor trials of participants with CKD, heart failure or Type 2 diabetes and a high cardiovascular risk, SGLT2 inhibitor treatment was shown to reduce the risks of cardiovascular death, hospitalization for heart failure and important kidney outcomes, including both reduction in progression of kidney disease and acute kidney injury compared to placebo in patients with or without diabetes.

“Treatment with empagliflozin reduced kidney disease progression or cardiovascular death and hospitalization from any cause, regardless of CV status,” said co-principal investigator David Preiss, MD, associate professor at the Medical Research Council Population Health Research Unit at the University of Oxford, England. “Given the compelling results for SGLT2 inhibitor treatment, both in the EMPA-KIDNEY trial and other trials, we hope these treatments will be approved by regulators and become widely available to treat patients with chronic kidney disease. SGLT2 inhibitors can be started even at low levels of kidney function, where risk is highest and clear benefits remain.”

Eicosapentaenoic acid (EPA), 1,800 mg/day, tended to reduce the risk of cardiovascular events in patients with coronary artery disease taking statins, according to Randomized Trial for Evaluating the Secondary Prevention Efficacy of Combination Therapy—Statin and Eicosapenteanoic Acid, the RESPECT-EPA Trial.

The open label randomized controlled trial to evaluate the efficacy of purified EPA on cardiovascular events randomized 2,506 patients with chronic CAD and a low (<0.4) EPA/arachidonic acid (AA) ratio at 95 sites in Japan. Patients were randomized to highly purified EPA 1,800 mg/day, or control group.

The primary endpoints of  cardiovascular death, non-fatal myocardial infarction (MI), non-fatal ischemic stroke, unstable angina pectoris requiring emergency hospitalization and coronary revascularization, did not reach a statistically significant difference. The primary outcome occurred in 14.9% of patients in the control group and 10.9% of patients in the intervention group (P=0.0547). Additionally, a significantly higher incidence of new onset of atrial fibrillation was shown in the EPA intervention group compared to the control group.

“The study showed borderline statistical significance regarding the effect of highly purified EPA of 1,800 mg/day for reducing the risk of adverse cardiovascular events in Japanese patients with chronic CAD treated by statins,” said Hiroyuki Daida, MD from Juntendo University in Tokyo, the study’s principal investigator. Dr. Daida said the findings indicate a possible prognostic benefit of EPA, 1,800 mg/day with statins in chronic CAD patients whose EPA/AA ratio was low (<0.4).