Artificial intelligence, trials and studies among the highlights of this year’s event. 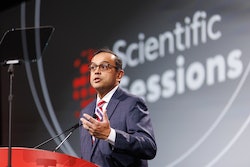 Following a virtual couple of years thanks to COVID, Scientific Sessions was back in a big way in 2022, with more than 4,000 abstracts, 700 sessions, 500 poster sessions, 200 seminars nine Late-Breaking Science presentations and nine Featured Science studies.

But beyond those numbers, Amit Khera, MD, MSc, FACC, FAHA, said this year’s event was about simply reconnecting during the Monday session "Trending Topics at Sessions 2022."

“It’s been a couple of years, we haven’t been able to do this,” he said. “And one of my favorite places was the FIT Lounge. That’s where these small sessions were happening about career development. Our (Fellows-in-Training) have not had this for two years so we have a generation that has not had this experience.”

Dr. Khera, Professor of Medicine at the University of Texas, Southwestern Medical School in Dallas,  was onstage along with a panel of eight other experts to look back at the highlights and lessons learned from the #AHA22 event.

Gissette Reyes-Soffer, MD, FAHA, presented some standouts in Basic Science that included four oral abstracts, 211 posters, two Frontiers in Medicine and seven cardiovascular seminars. But for her the biggest highlight was the seminars surrounding atherosclerosis, thrombosis and vascular biology.

Dr. Reyes-Soffer, a Herbert Irving assistant professor of medicine in the Division of Preventive Medicine and Nutrition at Columbia University, said that much of the science presented involving atherosclerosis, thrombosis and vascular biology “will be transformational one day,” including a fish oil supplement enriched in very long chain of polyunsaturated fatty acid (VLC-PUFA) that has shown multiple beneficial effects in mice such as lowered pro-atherogenic lipids and improved vision and cognitive function. She also said the ATVB Journal hosted an “exciting"session highlighting genomic-based therapies for cardiovascular disease.

Steven Jones, PhD, FAHA, associate professor of medicine at the University of Louisville, said for him, the named lectures were some of the most interesting talks this year. Specifically, he cited the Thomas Smith Memorial lecture delivered by Leslie Leinwand, PhD, a molecular, cellular and developmental biology distinguished professor at the University of Colorado. Her talk focused on, of all things, pythons.

“So you think, what do pythons have to do with the American Heart (Association), other than it might get your heart rate up, right?” Dr. Jones said. “But they made this observation that snakes go through periods of fasting and then re-eating, and they go through enormous growth of their organs when they feed and of course the heart is prominent among them. So she’s been able to find out some of the lipids that are involved in driving this growth and trying to leverage some of this information to figure out how we can use this to understand what’s going on in cardiovascular disease in humans.”

On the clinical science side, Jacqueline Tamis-Holland, MD, FAHA, professor of medicine at the Icahn School of Medicine at Mount Sinai in New York, trained a spotlight on some of the clinical trials that were presented this year, including the Comparison of Outcomes and Access to Care for Heart Failure (COACH) trial.

“The COACH trial was a really interesting trial,” she said. “And what I loved about the science this year is that it wasn’t necessarily just one medicine versus another, it was strategies to improve care.”

Dr. Tamis-Holland said this particular trial used an EHMRG30-ST risk score for understanding patients with heart failure and assessing their risks. The scores were used to predict the risk of death in patients with heart failure. High-risk patients were admitted to the hospital, while lower risks were either sent home or admitted for a short stay. Those who were discharged had a rapid heart failure follow-up for 30 days with a team that monitored their care until they saw their doctor. This strategy was able to reduce the incidences of death or CV hospitalization at both 30 days and 20 months.

“Whether it’s assessing somebody’s risk and triaging them appropriately or whether it’s the rapid heart failure follow-up, it’s not clear if it’s a combination of the two,” Dr. Tamis-Holland said. “But it really emphasizes the importance of systems of care to get together and take care of patients.”

Ajay Kirtane, MD, SM, FAHA, professor of medicine at Columbia University Irving Medical Center, said this was his first meeting as a Fellow, and he was especially impressed by the clinical cases that were presented in the lounges.

“(These were) super intimate sessions, there’s carpet, it looks like you’re just hanging out and you’re talking about clinical cases in a scientific and evidence-based way,” he said. “So for me that was really impactful.”

Dr. Kirtane said the focus on health equity was another key rewarding aspect of Scientific Sessions 2022.

“That’s a key function of what this AHA meeting was about, health equity,” he said. “We tried to feature that in the session where we talked about hypertension. In that session, we talked not only about device-based therapies, but drawing on the strengths of the AHA, we had hypertension experts, cardiologists and nephrologists all in the same room together going through cases of how we would manage these patients.”

Artificial intelligence (AI) was another hot topic this year. Norrina Allen, PhD, MPH, FAHA, associate professor of preventive medicine at the Feinberg School of Medicine, said AI is not the futuristic topic it once was because the future is already here.

And for Chiadi Ndumele, MD, PhD, FAHA, assistant professor of medicine at Johns Hopkins University, the highlights included everything from a Main Event talk on the evolving landscape of lipid therapy to late-breaking clinical trials and the invited sessions on cardiometabolic care and atrial fibrillation as a social disease.

“Honestly, there’s so much science that I really had a hard time just picking a few,” Dr. Ndumele said.

Manesh Patel, MD, FAHA, chair of the AHA Committee on Scientific Sessions, said there were some big themes this year, starting with the Opening Session discussion of misinformation.

“In that opening session, we heard that potentially one of the biggest problems is misinformation,” Dr. Patel said. “Spending time every day to try to get the right information out. The reason to come to the AHA, the reason to be in these meetings, is to not only be part of our mission — a relentless force for longer, healthier lives — but to figure out how to make that happen.”