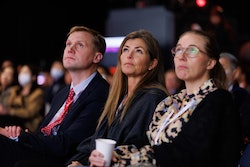 An international phase III trial of firibastat, a first-in-class inhibitor of aminopeptidase-A (APA) in the brain, failed to demonstrate significant reduction in in patients with difficult-to-treat and resistant hypertension. Results of the Firibastat in treatment-RESistant Hypertension (FRESH) trial were consistent across all subgroups analyzed and all secondary endpoints, according to George Bakris, MD, professor of medicine and director of the Comprehensive Hypertension Center at the University of Chicago Pritzker School of Medicine.

“We saw no effect on the primary endpoint, reduction of unattended office systolic blood,” Dr. Bakris said. “Firibastat does not really do much to systolic blood pressure.”

Reducing APA in the brain prevents the conversion of angiotensin II into angiotensin III, down-regulating vasopressin release and sympathetic nerve activity while increasing baroreflex, Dr. Bakris said. The effect is to increase diuresis, lower vascular resistance and control heart rate to reduce blood pressure. FRESH was designed to assess the efficacy and safety of firibastat versus placebo atop baseline therapy to reduce blood pressure in patients with resistant or difficult-to-treat hypertension.

The trial randomized 514 patients at 75 sites in 11 countries with unattended office systolic blood pressure (SBP) of 140 – 180 mmHg despite treatment with at least two classes of antihypertensive agents (difficult-to-treat) or at least three classes, including a diuretic (resistant). Patients were randomized to firibastat 500 mg twice daily (255 patients) or placebo (259 patients) for 12 weeks and followed for an additional four weeks. The primary endpoint was change in unattended office SBP from baseline to week 12.

At the end of week 12, SBP in the firibastat arm had fallen by 7.82 mmHg compared to -7.85 mmHg for the placebo arm, a difference of 0.03 mmHG (p=0.98). Secondary endpoints, including 24 hour ambulatory blood pressure (ABPM), daytime ABPM, and nighttime ABPM, similarly failed to show significant differences between active and placebo groups.

“There were no serious adverse events,” Dr. Bakris reported. “However, this drug is known to have allergic skin reactions, and we saw them in 5.1% of the firibastat arm but just one patient in the placebo group. Firibastat failed to show efficacy in this trial.”

Roughly 10%-20% of all individuals with treated hypertension remain uncontrolled despite three or more antihypertensive agents, including a diuretic. A novel approach, targeting the endothelin pathway, can significantly reduce blood pressure in patients with treatment-resistant hypertension (rHTN) up to 48 weeks with no unexpected safety signals.

“Patients with resistant hypertension represent a vulnerable and high-risk population,” said Markus Schlaich, MD, FAHA, FESC, ISHF, Dobney Chair in Clinical Research and Winthrop Professor of Medicine at the University of Western Australia Dobney Hypertension Centre in Perth, Australia. “Endothelin is a potent vasoconstrictor and an important player in hypertension but it is not targeted therapeutically by currently available antihypertensive drugs. The PRECISION trial tested aprocitentan, a dual endothelin receptor antagonist targeting this unopposed pathway.”

Participants with uncontrolled systolic blood pressure (SBP) ≥140 mmHg despite three or more antihypertensive agents were switched from their current antihypertensive regimen to a triple fixed-dose combination of amlodipine, valsartan and hydrochlorothiazide for four weeks, then moved to a blinded placebo run-in for four weeks. Those with continuing hypertension were randomized to placebo or one of two doses of aprocitentan, 12.5 mg or 25 mg, daily for four weeks. Subsequently, all patients were moved to aprocitentan 25 mg for 32 weeks, followed by a 12-week double-blind withdrawal period of aprocitentan 25 mg or placebo.

The trial population included 730 individuals with rHTN across 22 countries. At baseline, 69.2% were obese, 54.1% had diabetes, 22.2% had stage 3-4 chronic kidney disease and 19.6% had congestive heart failure. At screening, 63.0% of randomized patients were on ≥4 antihypertensive agents.

The most frequent adverse event was mild-moderate fluid retention in the aprocitentan 25 mg arm leading seven patients to discontinue treatment.

“This study tells us that we now have an alternative that can be used safely and effectively to improve blood pressure control in patients with resistant hypertension,” Dr. Schlaich said. “This drug class can cause some fluid retention and peripheral edema that can usually be managed with additional diuretic therapy. And aprocitentan can be combined with essentially any other antihypertensive medication, which is a great advantage.”

PRECISION was published simultaneously in The Lancet.

“For at least 20 years, chemists have struggled to create a drug that will selectively block aldosterone without also blocking cortisol,” said Mason W. Freeman, MD, executive vice president of clinical development at CinCor Pharma in Waltham, Massachusetts. “Baxdrostat is the first aldosterone synthase inhibitor to reach large-scale clinical trials for the treatment of hypertension.”

A total of 275 patients with rHTN despite demonstrated adherence to ≥3 antihypertensive medications, including a diuretic, were randomized to placebo or one of three baxdrostat doses, 0.5 mg, 1 mg or 2 mg daily, for 12 weeks. The primary endpoint was the change in office systolic blood pressure (SBP) from baseline. The secondary endpoint was change in diastolic blood pressure with pharmacokinetics and pharmacodynamics as exploratory endpoints. Safety assessment included adverse events, laboratory evaluations, electrocardiography and physical exams.

Dr. Freeman said a second phase 2 trial of baxdrostat in patients with uncontrolled hypertension despite use of up to 2 antihypertensive agents should be completed later in 2022. That second study will be followed by an open label extension to evaluated safety and tolerability out to 52 weeks.

BrigHtn was published simultaneously in The New England Journal of Medicine.

The latest trial of renal denervation (RDN) to control hypertension showed mixed results in a preplanned six-month analysis. Renal denervation in patients with uncontrolled hypertension despite guideline-based antihypertensive medication, the SPYRAL HTN-ON MED trial, showed a reduction of systolic blood pressure (BP) of 9.9 mmHg for office BP and 6.5 mmHg for 24-hour ambulatory blood pressure monitoring (ABPM). The office BP reduction was clinically and statistically significant compared to sham RDN while the 24-hour ABPM was numerically improved for RDN versus sham.

“In the expansion population of the study, 22% of patients in the sham arm experienced an increase in medication dosage and/or number of medications prior to primary endpoint assessment compared with 2% in the renal denervation arm, a 10-fold difference,” Dr. Kandzari said. “The difference was even more exaggerated in the Black ethnicity cohort, which represented about 18% of the study population, with 55% of the sham patients experiencing an increase in medication dose and/or number.”

The mean age of patients at baseline was 55, about 80% were male, with office BP of 163/101 mmHg and 24-hour ABPM of 149/96 mmHg. Patients in both groups were on a mean of 1.9 antihypertensive medications with a medication burden of about 3 based on medication number, class and dosage.

There was no difference in safety outcomes at six months, Dr. Kandzari reported. At six months, the sham group had a higher number of medications, 2.1 vs. 1.9 (p=0.01) and a higher medication burden, 3.5 versus 2.9 (p=0.04). Despite protocol mandate for no change in medications and encouragement of adherence to medications, there was a clear separation of antihypertensive medication use at three months.