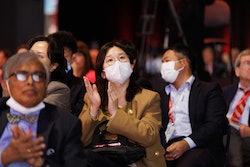 Sunday’s Late-Breaking Science session, “Drugs and Strategies in ACS and Revascularization,” found that:

“Two very large trials, MATRIX and VALIDATE-SWEDEHEART, suggested the best therapies for STEMI patients undergoing PCI were heparin monotherapy and bivalirudin with a high-dose infusion after the cath lab,” said Gregg W. Stone MD, FACC, MSCAI. “Until now, those two regimens had never been compared in enough patients to reach definitive conclusions, which led to confusion among operators and guideline committees. This trial, 6,016 patients across 87 hospitals, has shown that both mortality and major bleeding were reduced with the bivalirudin strategy.”

Dr. Stone is the director of Academic Affairs for the Mount Sinai Heart Health System and professor of Cardiology and of Population Health Sciences and Policy at The Zena and Michael A. Wiener Cardiovascular Institute Icahn School of Medicine at Mount Sinai.

The Bivalirudin With a Post-PCI High-Dose Infusion Versus Heparin Monotherapy During Primary PCI in STEMI: The Randomized Bright-4 Trial (BRIGHT-4) randomized STEMI patients undergoing primary PCI with radial artery access to bivalirudin with a post-PCI high-dose infusion for two to four hours or unfractionated heparin monotherapy. The use of glycoprotein IIb/IIIa inhibitors was reserved for procedural thrombotic complications in both groups.

In addition to the significant reductions in mortality and major bleeding for bivalirudin patients, the trial found no significant differences between the two groups for reinfarction, stroke or ischemia-driven target vessel revascularization at 30 days. Stent thrombosis was lower in the bivalirudin group, 0.4% versus 1.1% for heparin (p=0.0015).

“We would expect that many people will view the data as being definitive and would use anticoagulation with bivalirudin with a two- to four-hour high-dose infusion post-PCI when performing primary PCI in patients with ST-elevation myocardial infarction,” Dr. Stone said. “This should lower major bleeding as well as 30-day mortality in thousands of patients with STEMI.”

BRIGHT-4 was published simultaneously in The Lancet.

New data show that indobufen is less likely than aspirin to cause clinically significant bleeding when used with clopidogrel for DAPT after PCI. Patients receiving indobufen-based DAPT following implantation of a coronary drug-eluting stent (DES) were 27% less likely to meet a composite endpoint that included actionable bleeding compared to patients who received aspirin-based DAPT.

“Aspirin hypersensitivity may be rare. However, aspirin intolerance is common and associated with low adherence or discontinuation,” said Junbo Ge, MD, FACC, FAHA, head of Cardiology at Zhongshan Hospital, Fudan in Shanghai, China. “This can lead to substantially increased risk of ischemic events, especially among patients treated with coronary stents. Earlier trials demonstrated that indobufen lessens the adverse effects of aspirin while retaining antithrombotic effectiveness, but there were no randomized clinical data comparing the two in combination with a P2Y12 inhibitor.”

“In patients who need DAPT, aspirin replacement with indobufen on top of a P2Y12 inhibitor is feasible and can be recommended as an alternative when there is aspirin intolerance or allergy,” Dr. Ge said. “And in patients at high risk of bleeding or who need triple antithrombotic therapy with oral anticoagulants, indobufen might be considered as an alternative to aspirin. This trial was designed in 2017, before the current consensus on six months of DAPT for stable coronary artery disease patients. We are conducting further analyses of OPTION by different clinical manifestations and durations of DAPT.”

OPTION was published simultaneously in Circulation.

The first RCT of current guideline recommendations for evaluating patients who present with chest pain and suspected coronary artery disease (CAD) supports the use of quantitative risk stratification to select patients for testing and coronary computerized tomographic angiography (CCTA) with selective reserve (FFR-CT) as the initial imaging modality. Guideline-directed testing was around 70% less likely to result in death, non-fatal MI or catheterization without obstructive CAD versus usual care at one year.

“We have clinical guideline recommendations, many of them time-honored, for evaluating patients with chest pain who are suspected of having coronary artery disease, but most of which are based on observational data,” said Pamela S. Douglas, MD, Ursula Geller Distinguished Professor for Research in Cardiovascular Disease at Duke University School of Medicine and director of the Multimodality Imaging Program at Duke Clinical Research Institute, In Durham, North Carolina. “We want Class I, randomized trial-level evidence (level of evidence A) for all our guideline recommendations.”

The Prospective Randomized Trial of the Optimal Evaluation of Cardiac Symptoms and Revascularization (PRECISE) trial randomized 2,103 patients with stable angina at 65 sites in North America and Europe to either the admitting center’s usual testing or guideline-directed precision strategy between December 2018 and May 2021. The precision strategy included quantitative risk stratification that assigned minimal-risk participants to deferred testing and others to CT angiography with selective FFR-CT. Subsequent care was determined by each site.

The precision group had numerically more deaths/non-fatal MIs (1.7% vs. 1.1%) but the difference was not statistically significant. Dr. Douglas reported no deaths or MIs in the precision minimal risk group with deferred testing.

“The PRECISE trial supports the use of the PROMISE Minimal Risk Score at the time patients are seen for new onset chest pain, to guide the decision of who needs testing,” Dr. Douglas said. “This is a safe and effective way to reduce immediate testing in this large population by 20%. And for patients who need testing, PRECISE supports the use of CT coronary angiography with selective FFR as the initial test used based on randomized, controlled trial evidence and not just observational data.”

The ongoing ISCHEMIA-EXTEND study showed a reduction in cardiovascular death with an initial invasive strategy versus optimal medical treatment for patients with stable ischemic heart disease after median  5.7 years of follow-up. All-cause mortality was the same for both initial management strategies both in the initial trial phase and during extended follow-up. There was, however, an increase in non-CV death with an initial invasive strategy throughout the period of follow-up. The initial trial phase demonstrated that patients with significant angina reported improved quality of life following invasive management.

“The hazard ratio for overall mortality for invasive compared to conservative management is 1.0, with 95% confidence intervals 0.85-1.18,” said Judith S. Hochman, MD, Harold Snyder Family Professor and associate director of cardiology and co-director at the NYU-H+H Clinical and Translational Science Institute, New York University Grossman School of Medicine in New York City. “This is an interim report, and we will have longer term outcomes in another three to four years,” she said.

The initial ISCHEMIA trial randomized more than 5,000 patients across 38 countries with chronic coronary disease and moderate to severe ischemia to an initial invasive strategy with cardiac catheterization and revascularization if feasible or to guideline-directed medical therapy alone with cardiac catheterization and revascularization reserved for failure of medical therapy. There was no difference in a composite primary endpoint of cardiovascular death, MI, hospitalization for unstable angina, heart failure or resuscitated cardiac arrest or in major secondary endpoints of cardiovascular death or MI. ISCHEMIA-EXTENDed is tracking survivors of ISCHEMIA for overall follow-up of nearly 10 years.

“These longer-term results build on our original findings, which is that patients with daily or even weekly angina will likely see improved quality of life from either initial approach, but it is not going to prolong life. Although cardiovascular mortality was reduced, all-cause mortality is the same over time in both groups,” Dr. Hochman said. “Either strategy is acceptable, which is good news for patients, who have different preferences.”

ISCHEMIA-EXTEND was published simultaneously in Circulation.